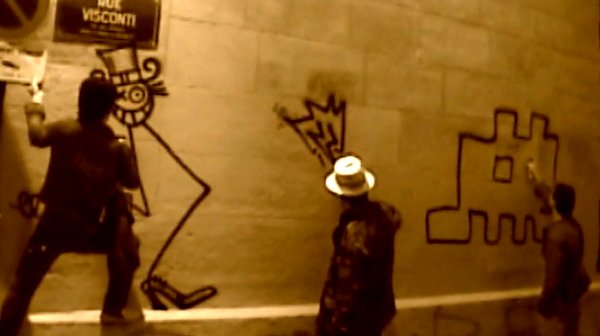 It turns out that the rumors around the Internet were true. Banksy is in Utah, at the Sundance film festival, to promote his new movie.

Exit Through The Gift Shop – A Banksy Film
– the world’s first street art disaster movie
the story of how an eccentric French shop keeper turned documentary maker attempted to locate and befriend Banksy, only to have the artist turn the camera back on him.

The movie is due to open in British cinemas on the 5th of March.

Update:
The danish newspaper politiken have an article about the movie up on their site.

Watch as writers like NOXER, LES, DRAG, NEMZ, and DEVI paint around the city for their soon to be released ‘Third-i-Soldiers’ DVD.

Looks like there is a new New York City graffiti DVD on its way.
via animalnewyork.com.

Finally you can buy Alterego on dvd from their site.

Here is the trailer for Alterego.


The movie features parts from among others Can2, Daim, Saber and Smash 137.

Old teaser of the upcomming (?) DVD from the graffiti artist GHOST!
His personal website is cousinfrank.com

Super dope trailer for the new DVD from Norway, PTR 3!
Looks like there’s a lot from Denmark too.